Completely new "Do 228" to Bangladesh

OBERPFAFFENHOFEN - January 25, 2022 - Over the past few months the Ober-pfaffenhofen site has been working particularly hard on the construction of the "Do 228" for the Bangladesh Navy. At the end of 2021 the aircraft was handed over to the Bangladeshi government and delivered in Chattogram. For German aircraft manufacturer General Atomics AeroTec Systems (GA-ATS) it is the first new air-craft built under its own management since the takeover of the former RUAG business unit in March 2021. "After only a few months under our management a brand-new 'Do 228' took off for its first flight in Oberpfaffenhofen again after al-most three years," said Harald Robl, GA-ATS CEO. "Quite rightly our colleagues at the site cheered this event. We can all be very proud of ourselves."

"In order to be able to offer our aircraft as early as 2024 as the "Do 228 NXT", i.e. as the next generation, our engineers are continuing to go at full throttle," says Harald Robl, looking to the near future. The aim is to further improve the flight characteristics and ca-pabilities and to bring the engine, handling and interior to a groundbreaking technologi-cal level. In Bangladesh, the "Do 228" will be in service with the navy in the future. The aircraft has advanced equipment and systems for carrying out special missions. It can be used for reconnaissance flights, maritime surveillance, search and rescue (SAR) missions, medical evacuation (MEDEVAC), cargo transport and military purposes. The aircraft's rectangular fuselage provides ample space for transporting passengers and cargo. It is also an ideal platform for integrating sensors for special missions.

On November 23 the "Do 228 D-CAEO" took off from Oberpfaffenhofen airfield for Bang-ladesh and made a stopover in Heraklion on Crete. From here, it made a refueling stop at Luxor in Egypt and then on to Bahrain. This was followed by the flight to Muscat in Oman. For the final handover to the Bangladesh Navy, the crew led by GA-ATS test pilot Steffen Gemsa and co-pilot Martina Hierle took off for Ahmedabad in India on No-vember 27. After a short refueling stop the aircraft headed for Dhaka and Chattogram in Bangladesh. Here the aircraft was received by the Bangladesh Navy flight squadron and can now take off on its missions.

The special mission aircraft delivered can carry a payload of about 2,000 kilograms. It is 16.56 meters long, 4.86 meters high and has a wingspan of 16.97 meters. The "Do 228" can take off and land even on short airstrips. With a maximum range of about 1,690 kil-ometers it can stay in the air for more than eight hours.

Notice:
We will be happy to take you on the “Do 228's” journey to Bangladesh on YouTube -> 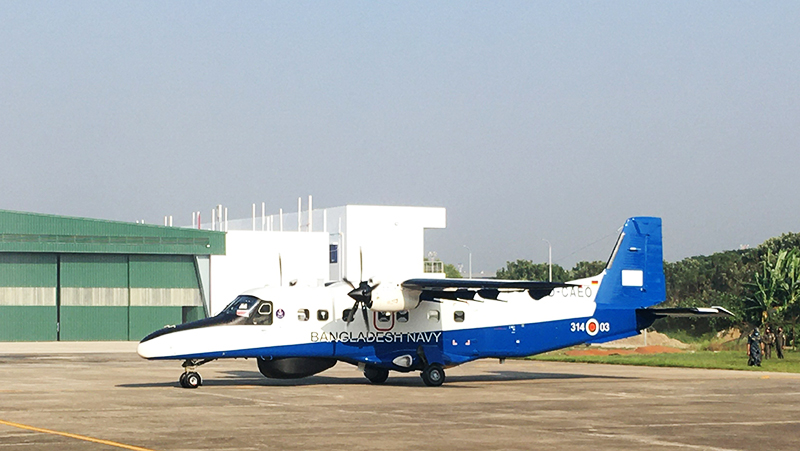 At Chattogram Airport in Bangladesh the new "Do 228" was received by the Bangladesh Navy.

About General Atomics Europe
General Atomics Europe GmbH, headquartered in Dresden, Germany, is a medium-sized service and consulting company that holds participation in nine subsidiaries with a total of more than 1,000 employees. In addition to its business activities in the aviation sector, the company's range of services includes the modernization and maintenance of rail vehicles, the disposal of conventional ammunition and explosives, special construction services and environmental remediation, engineering precast reinforced concrete parts, environmental monitoring and water technology. Today's GA-Europe has its roots in the former Spezialtechnik Dresden GmbH, which was taken over by the family-run US company General Atomics in 1992 and has since been consistently developed further. www.ga-europe.com
The parent company, General Atomics, is a global technology company with more than 15,000 employees and is headquartered in San Diego, California. www.ga.com